The Plesures of Reading, Viewing, and Listening in 2019, pt. 28: Arrate Hildago 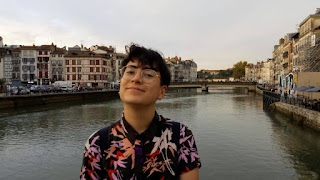 2019 has been, just as 2018, full of the chaos that comes with organizing a feminist SF festival in one’s hometown with not much organizing experience to speak of. This means that I have kept buying books but have finished far fewer of them than usual. Still, maybe that is why I have really enjoyed just sitting and reading a book this year, whenever I could. Below are some of the few books I have been able do that with in 2019.

My Tiptree (now Otherwise) award juror reading bled into the summer, when I had the chance to stop and really enjoy some of the books Gretchen sent me (thank you, Gretchen and publishers). One of those books is Sodom Road Exit by Amber Dawn, a queer ghost story which is much more than that and which really spoke to me in many ways, possibly due to my Catholic upbringing, among other reasons. The book bursts with sparkling language and yet manages to convey exactly what it is like to live with a lifetime of things unsaid.

I have been obsessed with CJ Cherryh’s Foreigner cycle since my friend and colleague Lawrence Schimel gave me the first book in the series. He has ever since kept providing me with volumes, and last summer I finished the first trilogy with Inheritor. One of the things I love the most about these books, apart from everything else, is the fact that as an overworked translator with anxiety I could not hope for a more relatable protagonist. I keep looking at the next three books on my shelf with longing. Maybe in February.

To be honest, if I were to highlight anything about my reading life in 2019, that would be the fact that I have kept delving deeper into contemporary women’s lit in Basque, and it has been a ride. Two of the titles that have had a greater impact in my head have been Kontrako eztarritik [“Down the wrong pipe”] collected by Uxue Alberdi, and Amek ez dute [“Mothers do not”] by Katixa Agirre.

Kontrako eztarritik is a collection of directed interviews conducted by bertsolari and author Uxue Alberdi with other women bertsolaris, which were then de-kernelled into classified topics relevant to feminism. Bertsolaritza or “bertso practice/making” is a Basque oral poetic tradition, performed in public, in which bertsolaris are given a subject and sometimes a metre and they must come up with an improvised, sung-on-the-spot string of verses that both rhyme and have a punchline at the end. Bertsolaris can be put in competition or cooperation with one another, depending on the moment, and they are important public figures in Basque folk and political culture. The same goes for contemporary feminist circles. Uxue Alberdi’s book is a pioneering attempt at X-raying the circumstances of women in the field by looking at concepts such as body, humor, Basqueness, and money and the way in which they all interrelate. (If you’re curious about this Basque thing, here is a thread by me on queer and trans representation in contemporary bertsolaritza, via legend Maialen Lujanbio’s outstanding work.)

On the other hand, Katixa Agirre’s Amek ez dute is a visceral look into the act of creation, both from the mother’s and the writer’s perspective, by merging both identities in the novel’s protagonist. After hearing the news that a woman near her hometown has drowned her infant twins, and finding out that the woman is actually someone she once met when she lived in England as an exchange student, the writer and rookie mum protagonist sets out to obsessively research the case and turn it into her next novel. To say it was a gripping read would be an understatement, and I was very surprised to be so sucked into a story with a plot summary that I would have definitely passed on, had my friends not recommended it to me. The author has translated herself into Spanish (Las madres no), if anybody out there is interested. It is very intense and, strangely, very enjoyable.

Among other things,  Arrate Hidalgo is Associate Editor at Aqueduct Press. She is also an English to Spanish translator, an founder and organizer of a feminist sf con, and an amateur singer. Visit her website at arratehidalgo.com.
Posted by Timmi Duchamp at 2:59 PM