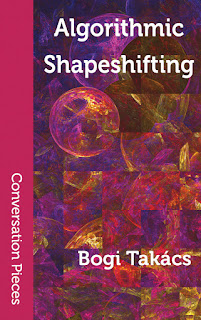 I'm pleased to announce the release of Algorithmic Shapeshifting, a collection of poetry by Bogi Takács, winner of the Lambda award for editing Transcendent 2: The Year's Best Transgender Speculative Fiction, and finalist for the Hugo and Locus awards. Algorithmic Shapeshifting includes poems from the past decade and previously unpublished work. The scope of the pieces extends from the present and past of Jewish life in Hungary and the United States to the far-future, outer-space reaches of the speculative – always with a sense of curiosity and wonder. Lisa M. Bradley provides a foreword to the collection.

“Bogi Takács is a poet of visceral exuberance and Talmudic invention. Moving as dazzlingly between genres as languages, e makes the reader eir kaleidoscope where ancient traditions, unenvisioned technologies, and children’s toys tumble with ordinary, transcendent precision, imagining new ways of being and observing others signally extant. These poems draw blood and spark synapses, make dauntingly familiar and tenderly strange. You should let them change you.”—Sonya Taaffe, author of Forget the Sleepless Shores

“Mind-bending, imagination-expanding concepts are paired with a uniquely kinetic delight in language(s). Seemingly mundane events, like taking out the garbage, turn into epiphanies. And the poems, speculative or not, always blaze with emotion.”—Lisa M. Bradley, from the Foreword

“Bogi Takács's poetry is gleefully and unabashedly itself, pulling the reader though surreal worlds of visceral magic, body modification, political wit, and interpersonal devotion. Whether looking back into Talmudic history, forward into a science fictional psychic war, or sinking into the earth and growing flowers from its eye sockets, Algorithmic Shapeshifting presents a voice that is consistently fresh, startling, and sincere.”—Ada Hoffman, author of The Outside

You can purchase the book in print and e-book editions at www.aqueductpress.com.
Posted by Timmi Duchamp at 12:20 PM