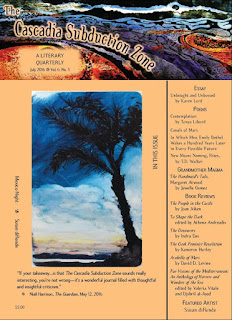 The new issue of The Cascadia Subduction Zone is out! This issue  opens with an essay by Karen Lord, "Unbought and Unbossed: Jane Eyre, Wide Sargasso Sea, and Amaryllis Collymore." The issue also includes poetry by Tonya Liburd and T.D. Walker, a Grandmother Magma column by Jewelle Gomez, and reviews of six new books; the issue's featured artist is Susan diRende (who is also the author of Unpronounceable, a novella in Aqueduct's Conversation Pieces series). If you're not already a subscriber, you can subscribe or purchase the issue here.

Reviews
The People in the Castle, by Joan Aiken
reviewed by Victoria Elisabeth Garcia

To Shape the Dark, edited by Athena Andreadis
reviewed by Lauren Banka

The Devourers, by Indra Das
reviewed by Anil Menon

Arabella of Mars: The Adventures of Arabella Ashby, by David D. Levine
reviewed by Cynthia Ward

Fae Visions of the Mediterranean: An Anthology of Horrors and Wonders of the Sea, edited by Valeria Vitale and Djibril al-Ayad
reviewed by Joanne Rixona

Featured Artist
From a Distance
by Susan diRende

Posted by Timmi Duchamp at 7:32 PM