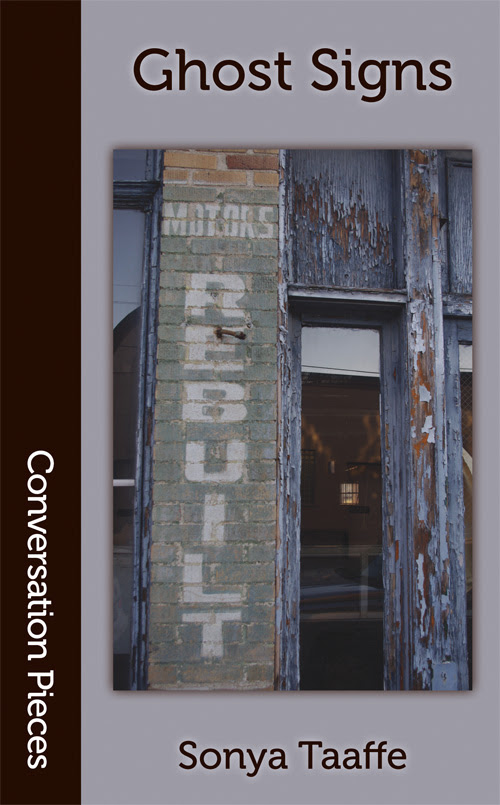 I'm pleased to announce the release of Ghosts Signs by Sonya Taaffe, in both print and e-book editions, as the forty-third volume in the Conversation Pieces series. Ghost Signs collects thirty-six poems and one story. “The Boatman’s Cure,” a novelette, is original to the volume.

"… A lantern hangs for the ghosts, both desolate and numinous. The white road and the black river run down into the dark and return again." In this collection of thirty-six poems and one story, Rhysling Award-winning poet Sonya Taaffe traces the complex paths between the dead, memory, and living.

A two-part cycle written over the course of seven years, "Ghost Signs" leads the reader through the underworld of myth to the hauntings of the present, where the shades of Sappho, Alan Turing, and Ludwig Wittgenstein exist alongside Charon, Dido, and The War of the Worlds. “The Boatman’s Cure” follows a haunted woman and a dead man as they embark on a road trip through coastal New England, an exorcism at its end. Sharply imagined, deeply personal, Taaffe’s work in Ghost Signs is at once an act of remembrance and release.

“Sonya Taaffe writes hauntingly of edgelands. Her poetic world lies on both banks of the Acheron, which may be crossed both ways. In Ghost Signs, she writes of uncompleted lives, of the lingering and commingling of the dead with us, the living. Where we meet are borderlands, uncertain spaces: in a saltmarsh, in the mud of trenches, in the realm of numbers, on the edge of sleep. There is darkness; but the journey is upward, into light. A transcendent book.”—Greer Gilman, author of Cloud & Ashes

Amal El-Motar has reviewed "The Boatman's Cure" in Ghost Signs for Tor.com. Here's an excerpt from her review:" In a collection—indeed, a congress—of ghosts, echoes, memories, and homages to ancient Greek literature, “The Boatman’s Cure” is a breath-taking culmination of its approaches and themes, a magnificent finale the intensity of which is derived from its quiet tension. Delia can see and interact physically with ghosts, and has discovered, through a great deal of trial and error, reliable ways of exorcising them; a personal quest requires her to obtain an oar with a strange history from an even stranger source. Nothing goes smoothly—except the beautiful structure of the story, which mimics the movement of an oar through water.

"It makes a beautiful arc: the story opens with Delia and a dead man named Evelyn Burney—the oar’s custodian—in a car, on their way to an unspecified “home.” The oar dips, and we see how they met; it dips further, and we see how Delia came to her understanding of ghosts and how to send them on; the oar rises and we return to Delia’s conflict with the dead man, before rising further to complete the circle of them back in the car. The narrative oar then inscribes a second arc of a different character: one that moves through Delia’s own past, her very being, and does genuinely brilliant things with the folk themes of boatmen’s curses in folk tales, where the acceptance of an oar is the acceptance of a burden that will only pass by giving it to another person."

You can purchase Ghost Signs now through Aqueduct's website.
Posted by Timmi Duchamp at 5:19 PM