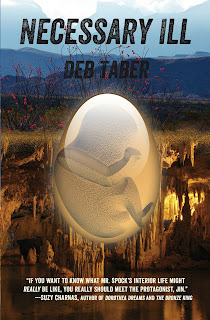 It's the last day of February, and a second shipment of the two books scheduled for March release has arrived here. So it's my pleasure to announce today the release of Deb Taber's debut novel from Aqueduct Press, Necessary Ill. This intriguing and enthralling tale has already garnered a starred review from Publishers Weekly (which also ran an interview with Deb about the novel) and blurbs from Suzy McKee Charnas and Rebecca Ore. As you may have noticed, Aqueduct doesn't publish all that many novels, so you can probably guess at our excitement to be launching this one. Both the print and e-book editions are available now at www.aqueductpress.com. They'll be available elsewhere some time in March.


The man slices Jin’s shirt open with his pocketknife, then stops, staring at the blank, bare chest.

“Never thought it would make such a difference,” says the second man, twisting Jin’s arm at a painful angle so that he, too, can see the smooth skin, unbroken by anything so unnecessary as a nipple.

A woman runs up hollering, waving a shotgun in the air as the first man claws at Jin’s belt. The rest of the street is suddenly empty.

“Get off of her you perverts! If you lay one finger…”

She sees Jin and stops…

Jin,the neuter protagonist of Necessary Ill, begins the novel as a designer of plagues intended to set the world back into balance—a balance of population and resources, creation and destruction, choice and certainty—a balance more important to it than any individual life, including its own. Sandy, a young woman thrust violently out of her farm life into the dispassionate science of neuters like Jin, discovers her own need for balance—a balance of safety and adventure, art and science, self-protection and love. But Jin and Sandy find that human life is full of change, and as the world is thrown off balance for all, each questions their ruling assumptions and must learn to see in new ways for the survival of friends and enemies alike.

"Necessary Ill offers hopeful glimpses of alternatives to the current cultural barrage of post-Apocalyptic savagery and regression to warlordism, writes Suzy McKee Charnas. "Along the way, the reader finds an in-depth exploration of what a human society minus sex hormones might be like. It’s also a startlingly inward look at a character that is basically a serial mass murderer and also a hero capable of change. A stimulating read with a refreshing slant on the core problems of the modern world; and if you want to know what Mr. Spock's interior life might really be like, you really should meet the protagonist, Jin.”

Like M. J. Engh's Arslan, in Necessary Ill we identify with what in other books would be the antagonist: an abused child now grown up, neither male nor female, with the harsh amorality of a child and a beyond-human intelligence, whose whole energies are calculations about resources, about how those of us who are female or male reproduce, and reproduce, and reproduce until the world wears out. Who's the hero in a world where humans outbreed their resources?"

"The author speculates about how individuals and society might evolve if sex wasn't such a potent part of the human personality. Some readers may find the sometimes dispassionate discussion of mass murder a bit unsettling but no one should find fault with the prose. Not the cheeriest book I've read this year but one of the more thought provoking."
— Donald D'Ammassa, Critical Mass, Jan 12,2013 (read the whole review)

Asked by her Publishers Weekly interviewer about inspirations for her invention of her society of neuters, Deb writes:


The first inspiration was the fact that there are, in reality, human beings born without specific male or female sex characteristics, although I took several fictional leaps with the science of the neuts’ anatomy, biology, and abilities. In Western culture, these people are surgically and chemically turned into females, usually as early as possible, and may never be told that they were born as anything other than female. Basically, our gender is defined as “male” or “not male,” based on the presence or absence of one specific sex organ, a perspective that is based in culture, not biology. A part of the neuter society in the book is a rebellion against that, a separate place where the neuters can be who and what they are, according to their biology rather than social constructs.

I also drew upon the interactions between the introverts and extroverts I’ve observed and interacted with all my life. As a highly introverted person, I wanted to try to show the beauty of the experience of aloneness in the Home Cavern world and the comfort that it has for its inhabitants. But the artist’s cavern enclave is there to balance that with the warmth of a much more affable community. It’s the balance of the contradicting aspects of human nature that drew me to explore both worlds.

Finally, the underground societies of both the artists and the scientists are based on my love of caves. I first went to Carlsbad Caverns when I was eleven years old, and I spent the whole walk through the caverns in awe of this huge, fantastical world, where there is so much more that is hidden than is revealed. I imagined undiscovered creatures living just beyond the cavern walls and through the tunnels that were closed off to the public. Once I had the idea for the neuter society, I knew I had to set it there. As I researched the book, I went back and took a wild cavern tour so I could experience firsthand the type of journey Jin and the others make every time they leave or come home, or move from one part of the cavern system to another. I’ll be talking more about this aspect on Mary Robinette Kowal’s “My Favorite Bit” blog feature on March 5, 2013 (http://www.maryrobinettekowal.com/category/journal/my-favorite-bit/).

Posted by Timmi Duchamp at 1:59 PM