I recently read a 19th-century feminist utopia that Alexis Lothian brought to my attention, New Amazonia: a foretaste of the future, by Elizabeth Burgoyne Corbett, a British journalist and novelist. Alexis discusses it in the first chapter of her dissertation. Although it bears some resemblance to other feminist utopias of the ear (particularly in its classist, eugenicist, ableist assumptions as well as its total erasure of race), it's different in three interesting respects:

First-- the novel was clearly written as a white-hot response to an anti-feminist petition for denying women the suffrage-- spearheaded by best-selling novelist Mrs. Humphrey Ward and signed by more than a hundred "ladies" of the literary sphere of the day (including Virginia Woolf's mother). Throughout the novel, Corbett rails against "feminine nincompoopity" and "women who are too bigoted in their own ignorance to know what is good for themselves or others," whose "name is legion." Here's a paragraph from the prologue:


Indeed, were it not that some of the perpetrators of this outrage on my sex are well-known writers and society leaders, I would doubt the authenticity of the signatures, and comfort my soul with the belief that the whole affair has been nothing but a hoax, got up by timorous and jealous male bipeds, already living in fear of the revolution in social life which looms before us at no distant date. As it is, I am able to avail myself of no such doubtful solace, and I can only feel mad, downright mad—no other word is strong enough—because I am not near enough to these traitors to their own sex to give them a viva voce specimen of my opinion of them, though I resolve mentally that they shall taste of my vengeance in the near future, if I can only devise some sure method of bringing this about.

She has a few insights that are promising, but doesn't seem to know what to do with them. "Corrupt, Degraded, Rotten to the core is British Civilisation, and yet we find women who ought to know better, actually pretending that they are perfectly contented with the existing order of things." Shortly after this, she interestingly suggests that these anti-feminist women are betraying other women out of class loyalty at the expense of the rest of their sex:


The principal signatories are in comfortable circumstances; have no great cares upon their shoulders; they plume themselves upon occupying prominent positions in society; it is to their interest to uphold the political principles of the men whose privilege it is to support them; they do not see that life need be made any brighter for them, therefore they conspire to prevent every other woman from emerging from the ditch in which she grovels.

Second-- She imagines a utopia in which men & women are equally involved in governing, public life generally, and in all the crafts and professions. This is a step beyond imagining a separatist scenario-- her utopia begins as initiated by women who organize a new government (a "colony" that isn't a colony) and find financing for it, but then allow men in without fear of their taking over.

Third-- When her narrator arrives in New Amazonia in 2472, she learns how New Amazonia came to be-- which is to say, she offers a future history, which looks back to the Victorian Age (which she regards critically) and imagines a social & geopolitical history in which New Amazonia came into existence. (Hint: there are a lot of wars, and New Amazonia in built on the ashes of Ireland.) 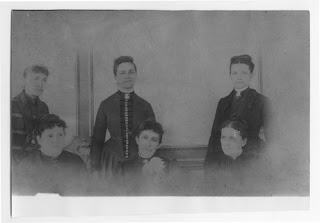 I was particularly entertained that at one point in the book the narrator remarks "There is a town in Kansas, called Oskaloosa, of which the Mayor and other members of the Corporation are all women. Their first term of office has been so triumphantly progressive that they have been enthusiastically re-elected, and within twelve months the place has made such wonderful strides in the trifling matters of social morality, sanitation, and prosperity, that it is the wonder of surrounding towns." She cites this as a "signal proof of feminine capacity." As you might imagine, on reading that, I just had to undertake a Google search. Sure enough, I discovered at the Kansas Historical Society site a bibliography of Jefferson County History that offers a photo captioned "First all woman city government in Kansas, Oskaloosa, 1888. (New Amazonia was published in 1889.) The women in the photo all look as though they're between 25-40 years of age. What particularly strikes me is that Corbett knew about that "all-woman" (interesting slip, no?) government, out in the middle of the North American prairie-- and that clearly that knowledge and its inspirational effect on her fueled her frustration with the anti-feminist women in English literary circles who were raising their voices to proclaim that women should be silent. (Have there always been Phyllis Schlaffleys, I wonder? Women who make a career out of denouncing other women for speaking for themselves?)

With all its flaws-- flaws I think it's well worth our while to take note of-- this is a fascinating document of the history of women's political imagination. I plan to bring it out, properly introduced by Alexis Lothian, in Aqueduct's Heirloom Books series. How, after all, can I resist such turns of phrase as "timorous and jealous male bipeds" and"feminine nincompoopity?"
Posted by Timmi Duchamp at 9:48 PM