Links for the Weekend 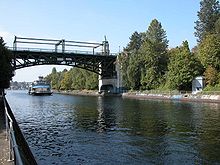 It's been one of those days. I spent several hours of it tramping through the rain so that I could get one of my precious electronic gadgets fixed. (Seattle's pretty decent bus system proved inadequate in this case.) I'd never crossed the Montlake Bridge (which is a drawbridge) on foot before, and so made the astonishing discovery that when buses cross its steel grid, they make the cement sidewalks running along the sides tremble in a rather scary way. So, a bit later than I'd planned, here are a few links of interest:

--Nicola Griffith, Hard SF and Soft, or Girls vs. Boys. Here's a brief taste: "For the Old Guard, a novel’s hardness depends to some degree on the biological sex of bodies entwined. Women are perceived as literally and metaphorically softer than men. If the viewpoint character having sex in an SF novel is a woman, the squick factor is doubled. If she’s having sex with another woman, the Old Guard passes out."

--Abigail Nussbaum sounds the clarion for A Few Good Women: A Call for Reviewers at Strange Horizons.

--N.K. Jemisin writes an open letter to Hollywood: Dear Hollywood: How’s That Bigotry Working Out for You? ---an absolute must-read.