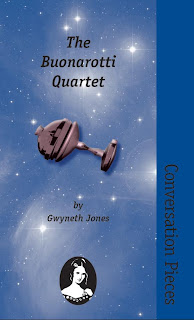 Aqueduct Press is pleased to announce the publication of The Buonaraotti Quartet by Gwyneth Jones, the twenty-fifth volume in Aqueduct's Conversation Pieces series.

The man who'd given his handle as Drummer raised heavy eyes and spoke, sonorous as a prophet, from out of a full black beard. “We will be ordered to the transit chamber as we were ordered to this room; or drugged and carried by robots in our sleep. We will lie down in the Buonarotti capsules, and a code-self, the complex pattern of each human body and soul, will be split into two like a cell dividing. The copies will be sent flying around the torus, at half-light speed. You will collide with yourself and cease utterly to exist at these co-ordinates of space-time. The body and soul in the capsule will be annihilated, and know GOD no longer.”—from “The Voyage Out”

In Gwyneth Jones’s White Queen Trilogy, the reclusive female genius called Peenemunde Buonarotti invented the instantaneous transit device of the same name. In the four stories of The Buonaraotti Quartet, Gwyneth Jones shows us humans traveling via the device to alien worlds and situations. Some are diplomats, some are extreme travelers, some are prisoners. All are in for a rough, wild ride.

The volume is available now through Aqueduct's website here. (And just a reminder: Subscriptions of ten consecutive volumes (beginning with the volume of your choice) may also be purchased through the site for $80.)

Here are notes Gwyneth has written about the fiction in this volume:

The Buonarotti Transit
The Buonarotti Transit first appeared in White Queen, a novel about an alien invasion of Earth —in which human gender issues come up against another way of cutting up the world, and a mechanist global civilization is overcome by a non-mechanist, highly intuitive and devious crew of buccaneers. Meanwhile, reclusive genius Peenemunde Buonarotti has been researching a means of instantaneous interstellar transit. She’s been piggy-backing her experiments on the Big Science giant accelerator nearest to her place of work: translating herself into pure information, splitting the code and sending two code-versions of herself around the ring, to collide at lightspeed and reach fusion with the State of All States. Not quite ready to publish, she returns from her first successful landing on an alien planet, the night the (apparently) faster-than-light-powered Aleutians announce their presence. . . “That’s torn it,” says Peenemunde, robbed of her big moment.

The “Buonarotti Device” features in the next two episodes of the Aleutian story as a lost treasure, as proof that humans were not always colonized and inferior; and as the symbol of an Utopian future, in which Humans and Aleutians will share the freedom of the stars as equals.

It all seems so long ago. . . “The Fulcrum” is the first Buonarotti story I wrote, and the most loosely connected to the universe of Spirit, the novel for which all these stories are preparatory sketches. It was my contribution to a themed anthology called Constellations. Orion is my favorite constellation, so that choice was obvious. I already had a device that sent people across interstellar distances, with unpredictable results. I found out about the Bok Globule, the star nursery in the Orion Nebula (also the Osiris angle), and there I had my science/astronomy strand. The fiction is a pure spoof on post-cyberpunk sf noir —hyper-masculine playground for nihilist vigilantes, where ordinary people (whatever their sex) had better shut up, accept that violence rules, and keep off the streets. I like a little fantasy mayhem as much as the next fan, but I despaired at the message that the critically acclaimed sf of the new millennium was giving to women, especially young women, as genre readers and as writers . . . and my response was laughter.

If you’re fond of Dashiell Hammett’s The Maltese Falcon, or rather the 1941 John Huston movie, you’ll spot liberally scattered references to this great and venerable “noir” in my plot, characters, and McGuffin. Orlando and Grace, besides being named for a (heterosexual, but conventional!) cat couple in a UK classic series of children’s picture books, are not aliens, they are humans with body-mods who like to call themselves aliens. Nice Eddie is the name of a character in Reservoir Dogs, another favorite old movie. Look out for what happens to the perfect (virtual) girlfriends: Sara Komensky, and “Annie-Mah.”

"Saving Tiamaat"
Every so often, science fiction futures need to be refreshed. New Space Opera is Space Opera updated, with the Cold War-ish scenario that’s been around since Star Trek I finally consigned to the recycle bin, the media taking their modern share in the making of governments, the megadeath weaponry refurbished, and sci-fi concepts like robotics, cyborgs, mind-control, total surveillance enhanced by contact with the actual technology. There was modern Space Opera before NSO (try C.J Cherryh’s Cyteen), but what’s really new is that in C21 the globalization of planet Earth is inescapable. If the proper study of science fiction is the present day, then right now NSO is the genre mirror of our world —a multi-state organization (choose your political flavor!) of diverse but basically similar peoples; struggling toward unity, beset by horrific genocidal wars, where the privileged few can cross staggering distances in no time, while the many casualties of the process are just moved from one internment camp to another. When I wrote “Saving Tiamaat,” my vague idea that I’d like to write a novel-length (new) Space Opera had become a firm intention, so this isn’t only a drama about a moral dilemma at a peace conference —and the mistake we still make (though we should know better!) when we assume that a woman will be nicer, more all-round civilized than a man. It’s also a sketch for “Speranza,” my interplanetary capital, the latest incarnation of a long-gone seedy space station called The Panhandle — the public architecture, the vast bureaucracy, the staffers’ breakfast bars; and the secret, ruthless shadow-self that every Utopian State conceals.

Physically (er, given that it’s inside a hollowed asteroid), Speranza is modeled on the EU glass and concrete hives of Strasbourg and Bruxelles: please substitute the majestic, allegedly good-willed super-government behemoth of your choice.

If the Buonarotti stories followed a fixed chronology (which they don’t, I never thought about it), “The Voyage Out” would come soon after “The Fulcrum.” The Panhandle has become a deep space Remand Center, where condemned prisoners wait to be transported to the unknown shore where they’ll serve life sentences. They don’t know if the Landfall planet even exists: maybe when they lie down in those couches they simply get vaporized; but they soon discover that the Buonarotti Torus, where the barrier between mind and matter is broken, makes spooky company. . .

When I wrote “Voyage” for Lynne Jamneck’s Periphery collection (it’s an anthology of Lesbian sf erotica), I'd been reading L.Timmel Duchamp's Alanya to Alanya. I think "Ruth Norman" is sideways-related to Timmi's "Kay Zeldin," a high-powered elite-academic in a similarly lawless yet oppressive future. A woman who has starved herself of pleasure so that she can live a life of principle; who has beaten herself up repeatedly, to keep her career (as a political activist, in this case) intact, but who has all kinds of longings and untapped potential. The secret life of nightdresses is a very ancient fantasy of mine, to do with a fairytale about some princesses who used to sneak out of bed at night and go dancing in fairyland. I used to spend a fair amount of time ill-in-bed when I was a little girl, and was devoted to my nightclothes. Much nicer than the clothes I had to wear in the waking world, where it was school uniform and other depressing outfits. The original Hilde was a girl at school with me, who had frizzy cinnamon braids and a beautiful smile. I always liked the look of her, but I never said anything, she was sporty, it was hopeless. I don't think I need to explain the Gruffaloes.

Here’s the rationale, a C21 variation on a venerable sf trope: the material universe, in the final analysis, cannot be logically distinguished from the perceptions of the observer, the maps of firing neurons that light up when you see the stars or think about string theory. We can manipulate one of these sets of information, pretty much without limit: why not the other? Once you’ve broken the barrier between mind and matter (for instance using the Buonarotti method; there are more dangerous ways, outlined in a series called Bold As Love, but they’ve been outlawed) you can do just about anything. If you know the 4-space coordinates of your destination you can simply arrive there, by an act of will, and your informational self will take material form from the ambient chemistry it finds —not merely your body, but your survival gear; or even large hunks of ancient masonry, if you’ve had the proper neuro-training.

The catch is that what really happens is an equation of staggering complexity, a huge volume of information space resolved into a new pattern. Conscious travelers, (and some of the party must be conscious, or nobody’s going anywhere) experience this complexity as an intense, disturbing dream. In White Queen, Buonarotti’s lab rats didn’t know about this effect, which proved to be a bit of a nightmare. In “The Tomb Wife,” the last story I wrote before the new novel, the perils of non-duration travel have been tamed, to an extent. There’s a consensus reality (we’re on a starship). There’s a navigator, who knows exactly what she’s doing. But things can still go wrong.

There are genre stories that are only genre because a strand of the arbitrarily strange has been threaded into the everyday world. “The Tomb Wife,” on the other hand, is a sci-fi tale with added strangeness.
Posted by Timmi Duchamp at 1:19 PM

ZOMG, Reservoir Dogs is an "old movie" now? Hm. Well, "Nice Guy Eddie" is still a great name; and congrats to Aqueduct on having this landmark Conversation Piece intersect with Gwyneth's illustrious series!