Centuries Ago and Very Fast 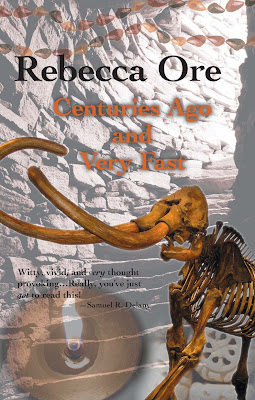 Centuries Ago and Very Fast by Rebecca Ore.

"When I first met him running on the moors, I thought he was gypsy or part Paki with his otter body and the broad head that ended in an almost pointed chin, but he said he was European, old stock, some French in the bloodlines. His left little finger ended just below where the nail would have been…"

— from Centuries Ago and Very Fast

Aqueduct Press is pleased to announce the release of Centuries Ago and Very Fast, a collection of linked stories by Rebecca Ore, author of Gaia's Toys, Time's Child, Slow Funeral, and other well-received novels. The stories in this collection relate tales from the life of Vel, a gay immortal born in the Paleolithic who jumps time at will. We encounter him hunting mammoths, playing with reindeer tripping on hallucinogenic mushrooms, negotiating each successive wave of invaders to keep his family and its land intact, living as the minor god of a spring, witnessing the hanging of "mollies" in seventeenth-century London as well as the Stonewall riots in twentieth-century New York City. Vel has had more lovers than he can remember and is sometimes tempted to flirt with death. Centuries Ago and Very Fast offers fascinating, often erotic glimpses of the life of a man who has just about seen it all.

Samuel R. Delany says: "Witty, vivid, and very thought provoking, these interwoven narratives of the most sophisticated of primitive lusts start with a gay caveman who happens to have been around over fourteen thousand years. Finishing an afternoon tryst with a Puerto Rican drag queen at the Chelsea Hotel in New York, he and his new friend wander back to Greenwich Village to end up smack in the Stonewall Riots of late June '69. Then we go hunting (and killing and dressing and eating and a few other things that might raise your eyebrow) a mammoth. But that's only the beginning. (Want to learn the right way to celebrate the winter solstice?) Ore's little book has intelligence and charm. Really, you've just got to read this!"

While Pamela Sargent, author of The Shore of Women and the Venus Trilogy and editor of the Women of Wonder series, writes: "In Centuries Ago and Very Fast, Rebecca Ore reveals the gritty and often less admirable aspects of human life without flinching but also without cynicism. These earthy, lively, and compelling stories centered around a time-traveling immortal show inventiveness, combine cosmic scope with realistic detail, and will leave readers wanting more."

Through April 1, Aqueduct is offering the special pre-release price for the book of $12 through its site. You can buy it here.

Posted by Timmi Duchamp at 8:47 PM

I am so tired of all these gay caveman novels. It's like, for decades one hasn't been able to spin one's drugstore paperback rack without seeing gay cavemen featured in one story or another. When will they ever end?

But do they wear neon blue condoms?

Wow, I had no idea that Aqueduct was making such innovations in packaging. No, I've never seen a mass market paperback wearing anything other than a price sticker, IIRC. Maybe Saran Wrap on occasion. What, are they afraid that Centuries Ago and Very Fast will reproduce like Becoming Alien did?

I have liked Rebecca Ore's work since Becoming Alien, which is still on my bookshelf. Slow Funeral was awesome. I guess I'd better buy this one.