Lisa Tuttle's My Death: A Novella 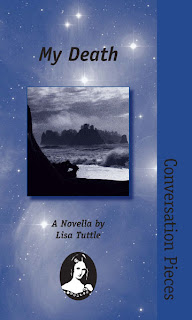 Are you in the doldrums? Then perk up, for here's some exciting news: two new volumes in the Conversation Pieces series are back from the printer. Both of them are novellas, the kind you can dive into and read in a single sitting. The first of the pair, Volume 21, is a novella by Lisa Tuttle, My Death.

...all at once, as if another light had been switched on, I saw the hidden picture. Within the contours of the island was a woman. A woman, naked, on her back, her knees up and legs splayed open, her face hidden by a forearm flung across it and by the long hair -- greenish, grayish -- that flowed around her like the sea.

The center of the painting, what drew the eye and commanded the attention, was the woman's vulva: all the life of the painting was concentrated there. A slash of pink, startling against the mossy greens and browns, seemed to touch a nerve in my own groin.

In this creepy but delicious story, an early twenty-first-century novelist decides to write the biography of Helen Ralston, an all-but-forgotten twentieth-century novelist she has long admired. In the late 1920s, Helen studied painting with W.E. Logan. Logan painted her as Circe, and Helen painted herself as an island titled My Death. When they parted for good, both of them turned to writing. Willy became famous; Helen did not. The narrator of My Death intends to do something about that. But first she must solve the mystery of Helen's relationship with Willy and why Helen titled her self-portrait My Death.

PS Publishing published this a few years ago, but since it's hard to get hold of in the US and absolutely yummy, I decided Aqueduct would have to publish it, too. As an extra little treat, we've published it with an afterward by me, a brief essay titled "The Holding Tank of the Eternal Feminine---Not."

You can purchase it now through Aqueduct's site for $9 (though it will be available in a few other places in the next month or two). Of course, if you have a subscription, they'll soon be arriving in your mailbox...
Posted by Timmi Duchamp at 9:45 PM