Voices from Fairyland by Theodora Goss

I've been sick for the last several days: hence my silence. But now I've got some exciting news.

I'm pleased to announce that this spring Aqueduct will be publishing Voices from Fairyland: The Fantastical Poems of Mary Coleridge, Charlotte Mew, and Sylvia Townsend Warner by Theodora Goss as a volume in the Conversation Pieces series. We'll be launching this volume at WisCon in May.

Coleridge, Mew, and Warner are only three examples of what I consider a broader phenomenon, the rest of the ice that must be present, underwater, when we see icebergs floating on a northern sea. That underwater ice is the tradition of women writing fantastical poetry. I will show you what I mean by focusing on one theme. Over and over again, women have written about witches. In "Witch-Wife," Edna St. Vincent Millay describes a woman whose "voice is a string of coloured beads, / Or steps leading into the sea" who "was not made for any man," not even the narrator, to whom she is married. The witch in Anne Sexton's "Her Kind" is fiercer and stronger. She tells us,

I have found the warm caves in the woods,
filled them with skillets, carvings, shelves,
closets, silks, innumerable goods;
fixed the suppers for the worms and the elves:
whining, rearranging the disaligned.

She creates a domestic space for herself in a place that is decidedly undomestic, that is wild, feeding worms and elves rather than the children that the women who are not witches presumably feed. "A woman like that is misunderstood," Sexton tell us, and we can certainly understand why, if her voice is a string of colored beads or those mysterious steps. She must speak differently, in a language that we cannot quite understand. And here is Emily Dickinson:

Witchcraft was hung, in History,
But History and I
Find all the Witchcraft that we need
Around us, every Day—

Whatever you do, she implies, you cannot eradicate witchcraft. It is part of the world around us, always present. And we—History and Emily Dickinson—need witchcraft. I wonder what they need it for exactly, but Emily Dickinson, always her enigmatic self, does not tell us. 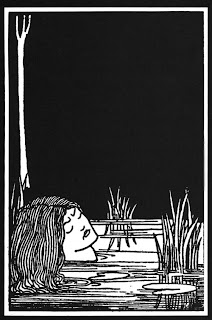