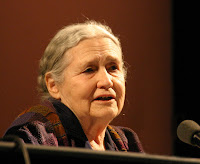 Doris Lessing has won this year's Nobel Prize in literature. It's about time. I've been waiting to hear this for years.

I began reading Lessing when I was in college and have read her ever since. My favorite of her books is one I haven't seen mentioned yet in the news about the prize: The Four-Gated City. For years I would bring up this book in conversation no matter what subject we were discussing. "Oh, yes," I would say, "Doris Lessing wrote about that in The Four-Gated City."

And she did -- The Four-Gated City gets at the heart of politics, of mysticism, of racism, of men and women, of the Sixties (even though she was a generation older than that), of just being alive. It even touches on the fantastic, presaging her later SF series of novels, Canopus in Argos. The Four-Gated City is usually cited as the final work in the Children of Violence series, but it stands on its own. The first four books introduce you to Martha Quest, but in The Four-Gated City Martha shows us the world.

It's been years since I last read it, but I just dug out my battered paperback copy so I can re-read it once more. Here's the last sentence, which I recognized immediately:

Here, where else, you fool, you poor fool, where else it been, ever ...

By the way, Lessing says she writes science fiction when she does, which is refreshing.

I recall when Shikasta came out, the New York Review of Books had Gore Vidal review it, presumably on the assumption that she was a literary writer who had dipped into SF and so was he (if you define literary very loosely, at least when he's writing fiction). Vidal, predictably, completely missed the point and trashed it. I haven't taken his work seriously since. Of course, Vidal hasn't won the Nobel and while I often find the Academy's choices puzzling, I doubt he will. (If you want to read this review, it's available for three bucks here, though you can probably tell all you need to know about it from the nasty first paragraph, which is at that same link for free..)

I was just looking online to see which of Lessing's works were still in print -- The Four-Gated City apparently isn't -- and was amazed at how many books she's written. I think of myself as someone who reads Lessing, and yet I doubt I've read half of them. I should snap up some used hardbacks quick online, before the prices go up.

Of course, The Golden Notebook is always mentioned when Lessing is discussed. It's a brilliant book, but very painful: I read it twice some years ago and recall reading faster and faster to get through it because I hurt for the characters. I should chase down my copy of that and re-read it, too.

She turns 88 next week, and according to Wikipedia, she's the oldest person to receive the Nobel.

A Reuters story, published on The Washington Post online says she's the 11th woman to win the literature award, which has been given since 1901. (34 women overall have received Nobels, according to the article.) I won't bother to discuss here how absurd that number is; I'm just going to enjoy the fact that a writer whose work made a lasting imprint on my life won the Nobel.

Posted by Nancy Jane Moore at 5:05 AM