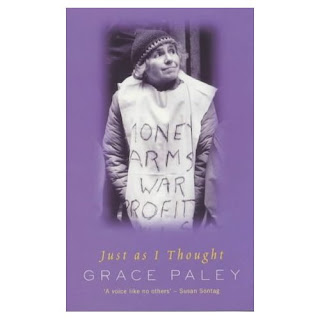 Speaking of writers who don’t write novels: Grace Paley is dead. Sad news for many of us. A friend with whom I constantly exchanged books back in the early 1980s introduced me to her stories by lending me The Little Disturbances of Because she was the only one I knew who knew Paley’s work, I mentally placed her among the many little-known writers only oddballs like me appreciated.

A few years later, I discovered how wrong I was. Paley gave a reading in a large auditorium in Kane Hall on the campus, and it was lucky for me that my party arrived fairly early, for adoring fans packed the room. As is often the case when I attend the readings of authors I’ve never before seen in the flesh, everything about her surprised me—her physical smallness, her age, her wisecracking manner, the high pitch of her voice, and her energetic gum chewing of what sounded like a big wad of gum. The latter, combined with the wisecracking style, kept making me thinking of her as a mid-century adolescent, even as the sharpness of her responses to questions from the audience continually forced me to revise that impression. (But what did I know then, in my late thirties, about the reasons a post menopausal woman might have for chewing gum.)

Since I was struggling with my first efforts at writing short fiction at the time, I was particularly struck with her replying (impatiently!) to a question from the audience about how of course every story is really two stories. I’d been paying close attention to Isak Dinesen’s stories at the time, and this matter-of-fact assertion confirmed my own thoughts on short-fiction structure. And to my delight, Paley talked also of political issues, particularly about the malign effects of policy in Latin America and the ’s complicity in the atrocities of the Pinochet regime on the lives of particular individuals. Paley always insisted that the political perfuses daily life, art, and indeed every aspect of our lives. I felt great pleasure when I heard Ursula K. Le Guin read a poem by Paley at a political rally in a few years ago; her choice couldn’t have been more fitting.

After attending Paley's reading, I heard her so-distinctive voice in my head every time I read a story or poem of hers or an interview, imagining they rhythm of her sentences and the intonations of her voice as I read her words on the page. Today, paging through Conversations with Grace Paley (1997), edited by Gerhard Bach and Blaine Hall, I heard her voice again. Here are a couple of excerpts from her interview with Barry Silesky, Robin Hemley, and Sharon Solwitz for Another Chicago Magazine in 1985:

RH: In the story “Somewhere Else” in Later the Same Day and in other stories in this book, the politics seem like this nice gentle undercurrent informed by your wit, and that seems to me to be what makes it so digestible in a way. That you’re not strident about any political message.

GP: What I’m trying to write about is ordinary life as I know it, which involves politics. But it also involves ordinary life. So I tend to show politics as part of ordinary life. I tend to show it as arguments between the son and the mother, you know in the last story (“Listening”). Or among the women in the way they talk about that while they’re also talking about the kids. And I guess one of the things you try to do when you write is to write the story you feel like reading somehow. So when I began to write about women early on it was because they seemed to be missing from what I was reading. In lots of literature, it’s like unless someone’s working with very specifically heavily political people like Marge Piercy does, it’s as though nobody does any politics, as though nobody think at all, and it’s not true. I mean in many ways a lot of that stuff enters people’s thoughts.

BS: What do you think about the contemporary state of feminism? One of my colleagues at work, a woman from who teaches mathematics, said when the word came up, “I’m not a feminist.” She made an effort to dissociate herself form that. And I was struck by that. Here’s a woman who is single, and heavily engaged in a professional career, and it seemed to me she’s only able to be what she is, in large part, because of the women’s movement.

GP: Here again, I think it’s an American effort, despite her being European, to refuse the politics of history and the history of politics—the way in which their own lives are influenced by political currents. They say, “I’m not part of this wave, it has nothing to do with me,” and I think it’s painful. It’s terrible when it’s with older people because they really should know better. But with the kids, it’s understandable because kids don’t have a strong sense of history.

BS: I think part of it in her case, as well as with others is a reaction to what they see as the stridency of the more visible aspects of the feminist movement.

GP: Well, any movement is strident if it’s a movement. That is to say, since there are so many noises around it in the society, it’s got to talk louder or it wouldn’t be heard.

BS: Are you actively involved in any feminist work now?

I think the women’s movement has done a lot for young men. I’m not telling you that because you’re young or anything. Do you think so? What do you think?

SS: I had a boy friend once who was an ardent feminist. He thought that women did see men as economic objects and that was one of the things that sullied male-female relationships. He was an abstract thinker and put everything in terms of polemic. He clearly thought that feminism had done a lot to benefit men.

GP: I just see among my son’s friends. I see the men with their kids, they’re all guys in their thirties, and they really are a wholly different bunch. And I think it’s wonderful for them too. I don’t think it’s just nice for Mommy.

BS: Different in the sense that they’re much more involved with the kids?

GP: They’re really interested. It’s not just that they’re doing it out of duty. They’ve really gotten into that process, which is a process of extreme patience that does them a lot of good.

BS: So you don’t necessarily agree with Nora Ephron’s comment that the one tangible achievement of the women’s movement in the sixties was the Dutch Treat?

GP: That’s a smart ass reply. I would have said, doing dishes. You can have really a very serious dinner party and not to your amazement any more, three guys will get up and do the dishes.

SS: We’ve been talking about politics and your interest which is more organic than intellectual; was there a time when you didn’t think much about politics and there was a sort of an awakening or were you from a family where it was part of the dinner table conversation?

GP: My parents didn’t do any politics. They did when they were young. They’d done a lot of stuff in but when they got here, they just paid attention to business. They tried to figure out how to make a good living, raise kids, buy a house, but they always retained their interest in what was happening in the world. There were always a lot of political discussions.

Hillel Italie’s obituary of Paley for the AP quotes from a 1994 interview with her: "I thought being Jewish meant you were a Socialist," Paley said. "Everyone on my block was a Socialist or a Communist. ... People would have serious, insane arguments, and it was nice. It makes you think the rest of the world is pretty bland."

Posted by Timmi Duchamp at 2:59 PM

"Because she was the only one I knew who knew Paley’s work"? Timmi, this business of hanging out mostly with goyim has gotta stop!

Seriously, thanks for the blog entry: it cushions the blow, a little.

I was privileged enough to spend some time with Grace the year she was at Hopkins -- she even led a number of us down to Washington for a protest march. She knew her way around a short story like no one, and she was a gracious, wonderful person. Thank you for commemorating her like this. -Cat

Chip Delany writes:
Paley's death is one of those surprises that shakes the joints a little. I first heard her read at the 92nd Street Y--in the *big* auditorium, where the famous writers read, when (back in the 70's) Donald Barthelme introduced her. He started with some anecdotes about her running arguments with Norman Mailor over the importance of femminism to the the anti-war movement. Only the previous week I had picked up my first collection of her stories--and read them. Thus, I knew this was someone important, not just to me as a reader, but--as I looked around at the standing room only audience--to many, many people.
Toward the end of the nineties, I was invited to read with Paley, during an overcast afternoon, at a place with many glass doors and windows, with much greenery outside it, called Wave Hill. Paley's *Collected Stories* had just come out, and I brought one. (That afternoon, she read a beautiful little story about a conversation she'd had with young man on a grayhound bus.) She signed the copy for me. Then, to my astonishment, she purchased a copy of my *Atlantis: Three Tales* (which I'd read from that afternoon), and asked me to sign it to her!
Three years later, as I was crossing Broadway to make my way up 82nd Street, I saw her coming out from an apartment house, under the green awning. I smiled and nodded, ready for her not to recognize me at all. But she immediately stopped(!)remembered my name(!!), and said she had read and enjoyed Atlantis (!!!)--I was flabberghasted. She had come into the city, she explained, to help take dare of an aging sister.
Paley struck many people as the most ordinary of generous and friendly New Yorkers, easy to talk to, full of interesting ideas, who just happened to be a spectacular writer.
Paley's relatively slim opera omnia of tales (or the slim volumes that make it up: Later the Same Day, Enormous Changes at the Last Minute . . .) are a Chekovian course in the possibilities of short story form in English. Any writer--or, indeed, reader--who loves the American voice can take that course and know she or he will be better for it.
Thanks, Timmi, for your memories. Thanks for listening to mine.